We are able to offer three different methods for determination of enantiomeric purity of the amino acids in different matrices:

For free amino acids this method is appropriate since no hydrolysis is necessary and thus by-products not expected.

This method is also appropriate for most amino acid derivates. If however cleavage of the protective group leads to significant amounts of byproducts or if the sample itself is contaminated, possible co-elution with a contaminant will falsify the results. Racemization during sample preparation is seldom observed. If this is however possible, the GC-MS (A.0.3.) analysis is recommended.

For peptides the method can give an estimation of enantomeric purity with low accuracy. But reliable determination <1% for most amino acids (for Cysteine <10%) is not possible with this method, even if expected razemisation during hydrolysis is taken into account.

In this method, racemization during hydrolysis and derivatisation is paralleled by deuterium exchange in the α-position (deuterium label). The proportion of D-amino acid originally present in the peptide is thus represented by the relative amounts of the unlabeled form which is monitored by mass spectrometry. Thie deuterium-labeling method should also be used for the accurate determination of the enantiomeric purity of amino acid derivatives deviation (eg. for derivatives with a specification <0.3%)

The third method uses chiral columns in HPLC. Some amino acid derivatives can be separated directly on chiral HPLC columns but require a chromophoric group such as Fmoc for detection with a UV detector. The lower selectivity of the chromatographic column is often compensated by the high selectivity of the detector. 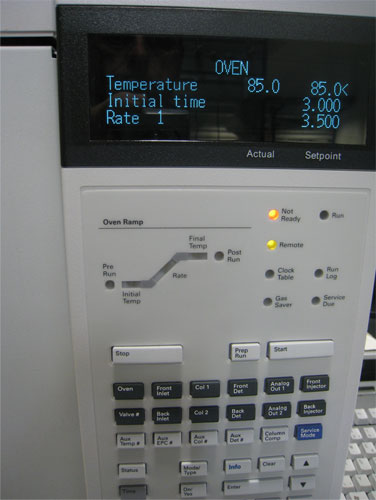 The results for the determination of the enantiomeric purity of amino acids in peptides this method hasa weakness: under the condition of hydrolysis, racemization occurs and the amount of racemate determined represents the sum of the amount originally presented in the peptide plus the amount generated during hydrolysis. In addition, the standard deviation of the racemisation during sample preparation is high due to matrix and sequence influences.

For this reason the method is limited to semi-quantitative determination of racemate content of peptides and hydrolyzable amino acid derivatives.

Unambiguous quantitation of racemate requires hydrolysis with 6N D2O/DCl followed by derivatization using deuterated reagents. Racemization during this sample preparation is paralleled by deuterium exchange in the a-position (deuterium label). The original proportion of D-amino acid in the peptide is represented by the relative amounts of the unlabeled form which is monitored by mass spectrometry. The limit of quantitation is 0.1% of the optical antipode. The standard deviation is <0.1%

By capillary gas chromatogra¬phy on a chiral stationary phase it is possible to separate all protein amino acids to¬gether with their enantiomers. Furthermore also nearly all non-proteinogenic a-amino acids and most of the N-methyl-amino acids can be analyzed in respect of their enantiomeric purity using this method. Amino acids with more than one chiral center are separated into all opti¬cal antipodes so as isoleucine, threonine or cystine. The amino acids must usually be deprotected, followed by ester¬ification and acylation using achiral reagents to obtain volatile derivatives for the chiral separation. The cleav¬age is performed either during esterification or in a separated hydrolysis step with aqueous hydrochloric acid. Fmoc cleavage is performed with piperidine at 0°C. The method of cleavage giving minimum racemisation is chosen. Often derivatives can be separated without cleavage (e.g. Acm, Boc, Bzl or Acetyl amino acids). If cleavage or hydrolysis is necessary, mass selective detection can increase the accuracy of the result for some derivatives.
The second method uses chiral columns for HPLC. A couple of derivatives can be separated on chiral HPLC columns without derivatization, if they have a chromophoric group like Fmoc. The lower selectivity of the chromatographic column is often compensate by the high selectivity of the detector.

Results: Determination of the optical antipodes down to 0,1% (LOQ) .